Marilia Fayh, painter and sculptor, born in Porto Alegre, Brazil, Marilia Fayh has had her works exhibited in several countries, more recently in Paris and Rome. She makes telling use of different elements, juggling with her bronze figures and even composing sculptures on canvas. Mirth and rhythm are present in her lively-colored and resolutely-stroked paintings and lithographs — keyboards, sensuous cats — a touch of mystery and tenderness, space and simplicity.

Every artist bestowed with talent is made to offer a perception of reality that on the one hand is readily understandable to the common eye, and on the other, is not promptly deducible, or not first-handedly distinguished, being thus a promoter of insights to a reality unseen. This is what Cézanne said of Monet, the trailblazer of Impressionism: “There’s an eye, and that’s an eye!” 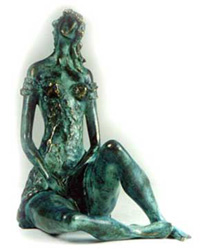 Marilia Fayh is after this goal: though faithful to figurative depiction to keep a dialogue with the great public, her account of the female manifestation is nevertheless implicative and somewhat original. Marilia is interested not only in the choreographic dimension of the female body, but also in something more elusive: the sensuality of its contour. But this very sensuality and the merely physical, sexual miens of the woman are not to commingle. Sensuality — or more richly defined as eroticism — bears on the essence within the woman who knows herself loved. It is so that eroticism in representation covers distances otherwise excluded by the choreographic simplicity.

So, it is worth our while stopping at some of Marilia’s sculptures. Her figures may be standing, seated or recumbent, moving or motionless. No matter the position they are to us presented, what we see at first is a given utterance, more line-oriented than volume-bound. But beware, at first sight only, for it is simply by letting our eye rest for a little longer on Marilia’s women that we sense not only the linear element as provoking, but also the shade of bodily volume that in the female figure tends to roll on, and it is wont to, as it were, flow — like water gently rippling past.

This blending of motion and volume, for us to caress and correspondingly ensconce ourselves in, is one of the greatest features of Marilia’s art: her work instinctively encapsulates the demands shaped by abnegation and creation and taken for granted by the condition of the female body. In some sculptures such as ‘Clarissa’in which a sitting young woman vividly shows the contrast between her delicate bosom and voluminous, voluptuous thighs, the choreographic simplicity is salient. That contrast is made more evident by the mass of the breast that debates with the fluidity of the legs. Sometimes Marilia prefers another form of expression, that is, when she yields to the beauty of bodies that, in this case, undergo esthetic distortions.

An example of this is this girl on a chair named ‘On The Blurry Border Of All Horizons’.

Or else, this is likewise noticeable in other works in which we see partners embracing. It is possible that her sculptures achieve a higher affective inflection when Marilia presents the two elements rhythmically intermingled, even if by deforming the body towards eroticism.
Notice the girl seated holding her knees together, ‘Lilah’, one of Marilia’s best sculptures. 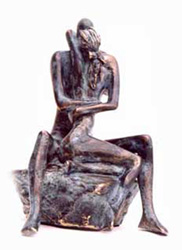 It is in like manner absorbing to mark yet another aspect of Marilia’s work: a given proclivity to kittenish presentation that lends lightness to sensuous expressiveness. This girl balancing a minuscule bicycle on the sole of her left foot ‘Scoring An Overhead Bicycle Goal’, which recurs in Marilia’s work, or the girl who enjoys herself, as an athlete does, spinning a wheel in ‘Cycling’. The ruse works well, specially because the gracious object ends up reinforcing the suggestion of a rolling female makeup.
Marilia is also a painter and engraver. Her pictorial works hold singular characteristics, as here the artist tackles the female reality under a different light: that of childhood and adolescence, with the poetry and romanticism inherent to those epochs of our lives. The bodily representation becomes eternal, and is replaced by symbolic objects. Oftentimes the body is reduced to a silhouette.

It is in the lithographs that Marilia’s representation of the woman comes closer to the sculptural figurativeness, as seen in ‘Study For A Sculpture’.